Tasmanians of German birth fell under deep suspicion during the war. Mining engineer and anthropologist Fritz Noetling married Tasmanian Ethel Seal in Calcutta in 1899. They came to Hobart in 1906 and Fritz obtained Australian citizenship in 1908. A respected member of the community, he joined the Royal Society and the exclusive Tasmanian Club, and was a Trustee of the Tasmanian Museum and Art Gallery (TMAG).

Fritz attended his last museum Trustees’ meeting in August 1914. Seven months later he attended the society wedding of his wife’s cousin, Joyce Mitchell, to Dr William Crowther. In June 1915 the Tasmanian Club committee had a quiet word with him after fellow member Colonel Evans (who was also the censor for Tasmania) demanded that he be banned from the club premises. Despite his protestations of innocence, in November 1915 Fritz was arrested under suspicion of spying and for “making disloyal statements”. It remains unclear whether the accusations were true.

Although some people avoided and even abused her, Ethel worked tirelessly to raise funds for various Red Cross and patriotic funds. Following Fritz’s denaturalisation and return to Germany in 1919, Ethel remained in Tasmania, apparently estranged from her husband. One wonders about her feelings during the war, her husband interned as a suspected spy while she continued pursuing her patriotic activities. 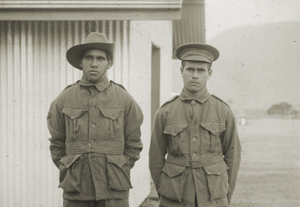